The Association of Ramaytush Ohlone

Spanish explorations in Aramai territory began 31 October 1769 when the Portola Expedition arrived in San Pedro Valley. The Portola party remained in the area for a few days, and on 4 November 1769 from a summit along Sweeny Ridge the Spanish explorers beheld San Francisco Bay. A second expedition under Captain Rivera reached the San Pedro Valley in December of 1774.
After traveling the previous day from Martini Creek, the Portola expedition traversed the Montara Mountains and arrived in the San Pedro Valley near the village of Pruristac. Fray Juan Crespi described the scene:

we descended from the hill and pitched camp in the middle of a small valley,
some six hundred varas long and about a hundred wide, which has plenty of
water in two small arroyos which unite to enter the sea. The valley has a
great deal of reed grass and many blackberries and roses; there are a few trees
in the beds of the arroyos, and some moderate-sized willows, but on the hills
there was not a single tree to be seen except some on a mountain range
which encircles this bay. Not far from the camp we found a village of
very friendly heathen, who, as soon as we arrived, came to visit us with
their present of tamales made of black seeds. Judging by the fires that
we have seen on the beach it must be well populated with villages.
​Uncertain as to their location—whether near the port of Monterey or near the port of San Francisco as described by Cabrera Bueno—Portola sent out scouts to investigate the local area while others hunted for deer. Three days later on 3 November explorers returned to camp in the evening “firing loud salutes, thus letting us know in advance that they were bringing some good news” (Crespi). Crespi continues,

They told us what they had learned or inferred from the uncertain signs
​     made by the heathen; that is, that two days' march from the place
which they had reached, which was the end or head of the estuary, there
was a harbor and a ship in it. As a result of this many now believed
that we were at Monterey, and that the packet San Jose or the San Carlos
was awaiting us. And certainly our necessities made us wish, even if we
did not believe, that we were in Monterey instead of San Francisco. In
consequence of these reports the commander decided to continue the journey
in search of the port and ship of which the heathen had given
information to our explorers. 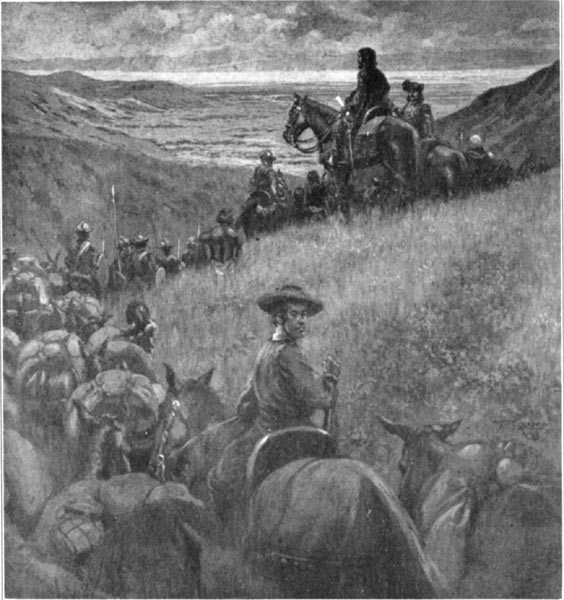 Several years later in 1774, Captain Rivera and Francisco Palou were sent from Monterey to search for a site for the establishment of a presidio and mission in the San Francisco Bay. Upon their return journey in December 1774, the explorers passed Calera Creek and village of Timigtac as well as the San Pedro Valley and the nearby village of Pruristac. Curiously, Palou notes no encounters with natives. After crossing the steep Montara Mountains and a few arroyos further south, Portola’s expedition met with the Chiguan. At this point Palou notes the location of a temporary Chiguan village:

The village is built right into the arroyo on a high    mesa something like an
island, and from the plain neither it nor even the channel of the arroyo is
visible. No doubt they live in this place in order to free themselves from
the winds and cold, from which they are well protected. The village
does not seem to be large, judging from the few houses which it has, as
well as from the small number of adult people who permit themselves to
be seen, who did not exceed twenty.
​Rivera and company remained overnight. In the morning of 7 December 1774 the Chiguan brought “large baskets of thick atole and some large tamales made of their black seeds,” which the soldiers found flavorful (Palou 437). The “little chief” as he was referred to by Palou, most likely Chiguan headman Egidio Cacegmne, brought his son of about twelve years to whom Palou offered “glass beads and other little gifts, for which his father effusively expressed his thanks” (Palou 437). On 8 December Rivera, Palou, and party continued south to Monterey.
​Mission San Francisco De Assis or Mission Dolores was founded by Fray Francisco Palou 29 July 1776 along Dolores Creek and near the Yelamu village of Chutchui. Conversion of the natives was delayed until 1777 because the Ssalson attacked the Yelamu whom they drove away.
The first native baptized at Mission Dolores was an important twenty-year-old Yelamu man named Chamis to whom was given the Spanish name, Francisco Moraga (SFD-B:00007). Francisco Chamis’s family would become important because his sister’s marriage to a Ssalson man would help to quell hostile relations between the Yelamu and Ssalson (See Milliken 1995:78). His mother married Pruristac key leader Manuel Liquiiqui.
Proximity influenced the sequence of baptisms among the Ramaytush tribelets—those closest to the mission were baptized before those more distant. Since Mission Dolores was situated within Yelamu territory, a larger proportion of the Yelamu were baptized earlier than other tribelets further south. Using average baptism years as an indicator, the Aramai were the third tribe to be incorporated into Mission Dolores, and by 1784 they had been almost entirely incorporated into Mission Dolores. Aramai headman Luciano Yagueche and key leader Manuel Liquiiqui were baptized in 1783.
​In 1785 conditions at the mission became worse for neophyte Indians as disease spread as a result not only of overcrowding and a dwindling supply of food. In response, the missionaries to construct an outpost (or asistencia) in Aramai territory in the San Pedro Valley. During his journey through the valley in 1774 in search of a site for the mission, Francisco Palou noted that the San Pedro Valley would be an ideal location because it had “land, water, and pasture for cattle”; however, it lacked the necessary timber for construction, so it was eliminated.
​Life expectancy for the Aramai did not differ from life expectancy for other Ramaytush tribes. At Mission Dolores life expectancy after baptism declined to about 4 years on average by 1790. According to Randy Milliken et al., “[b]y 1801 all of the native San Francisco Peninsula people had joined Mission Dolores” (Milliken et al. 2 ) As the result of disease and other factors related to missionization, approximately 80% of the Aramai population died by 1800. By 1834 “only 37 descendants of the original San Francisco Peninsula Indians” (Milliken at al. 2) were living at Mission Dolores, and by 1842 that number dwindled to about 15 persons (The San Francisco Census of 1842).
​References
Randall Milliken at al. Ohlone/Costanoan Indians of the San Francisco Peninsula and Their Neighbors, Yesterday and Today. Oakland, CA: Archaeological and Historical Consultants, 2009.